The Irish Cultural Hall of Fame was approved by the North American Feis Commission in 1978 to memorialize those who have given unselfishly of themselves to promote Irish culture through their leadership and participation. Congratulations, Mrs. Maureen McTeggart Hall!

Rose Mary "Maureen" Hall was born in Cork, Ireland, to Thomas and Rose McTeggart. The fourth of seven children, Maureen spent her childhood immersed in traditional Irish dance, which was to become her lifelong passion. At age 25 she married William Hall. In 1958, with two children and pregnant with her third, they emigrated to Los Angeles, CA. They soon moved to Firebaugh, CA, where they spent ten years before settling in Fresno. Their family grew to include two daughters and five sons.  Maureen's commitment to her husband and children was limitless. This deep love found expression in daily kindnesses and a lifetime of great generosity. She valued and taught fairness within the family and for all of society. Her greatest gift to those who knew her was the way in which she modeled a life well-lived, one shaped by respect for all, integrity, empathy, a strong will, and the courage to follow one's passion. Throughout her long life, Maureen shared these attributes with the many thousands of children she taught in her dance classes, all of whom she addressed as "love". A gifted dancer in a family of highly talented dancers, she discovered teaching was her calling. At the age of  12, she began assisting students in her eldest sister Peggy's classes in  Cork. By age 16 Maureen was bicycling to nearby villages to teach classes. This began a pattern of traveling-to-teach that grew to amazing proportions. While still teaching in and around Cork, Maureen soon graduated to borrowing a brother's motorcycle or the family car to start new classes at ever-increasing distances, and at one point would teach classes in six different villages on a Saturday. At 21 she founded her own school, The McTeggart Irish Dancers. After settling in  Firebaugh she started weekly classes at St. Joseph's Elementary School,  Romain Playground in Fresno, and various locations in the San Francisco  Bay Area. By 1965 she had six children ranging in age from newborn to nine years old but was teaching every Thursday night in Fresno and every  Saturday afternoon in San Francisco, making the roundtrips with all her children. For the students at St. Joseph's, she learned and then taught international folk dances, teaching each grade a different country's traditional dance, including ones from Mexico, Spain, Ukraine,  Philippines, Ireland, American square dancing, and more. Once a week after school she would conduct an Irish dance class open to everyone.  Her seventh child was born just days after the family moved to Fresno in  1971. In Fresno, she began teaching international dances at St.  Anthony's and Heaton elementary schools, as well as her own private classes. Maureen's Irish dance teams stood out in the 1960s and early  1970s for being racially integrated, a fact she never mentioned to the children because for her race was never a concern. In the next phase of her career, Maureen began traveling annually to Ireland and teaching monthly in Denver, CO. Over the decades she added dance classes in more cities, and the trips to Ireland increased, too. She eventually amassed more than five million miles in the air. After the death of her beloved  Bill in 1990, Maureen moved to Denver but returned to Fresno ten years later. In her final years, though well into her 80s, her teaching itinerary still included monthly trips of back-to-back days in Dallas,  Houston, New Orleans, Lexington, and Oklahoma City. She judged dance competitions throughout the United States, Ireland, and Great Britain,  and frequently flew to Dublin for meetings of An Coimisiún Le Rincí  Gaelacha, the governing board of Irish dancing on which she served for  40 years. She also served as an examiner for new teachers and adjudicators seeking certification. Maureen regarded her greatest career accomplishments as establishing Irish dance classes in cities that had none and mentoring new teachers to carry on the tradition. This includes both of her daughters, Pat and Anne, who teach and adjudicate Irish dancing full-time. Maureen also valued taking her dancers to different parts of the United States and the world. Former students regularly thanked her for the important role she had played in their lives. From driving station wagons jammed with dancers to Vancouver, Denver, or Boston, or bringing groups of dancers from the United States to compete in Ireland, she broadened the horizons of countless young lives. Maureen was preceded in death by her husband, Bill, and son Jack. She is survived by her sister, Betty Walsh of Cork; her children, Pat Hall of  Tucson, AZ, Christina Hall of Fresno, Kevin Hall and Anne Mosgrove of  Fresno, Tom and Jan Hall of Henderson, NV, Bill and Leila Hall of  Fullerton, CA, Vince Hall of San Diego, CA, and Anne Hall of Denver, CO;  ten grandchildren; three great-grandchildren; and thousands of dancers across the United States and Ireland. She taught us all, on the dance floor and off, to stand straight, stay on our toes, support one another,  and most importantly, to leap as high as we can. A Rosary will be held at  Whitehurst Sullivan Burns & Blair Funeral Home in Fresno, CA, on  Monday, February 27, 2017, at 7:00 p.m. A Funeral Mass will be held at  St. Anthony of Padua Catholic Church in Fresno, CA, on Tuesday, February  28, 2017, at 10:00 a.m. Interment will follow at St. Peter's Cemetery.

to the North American Feis Commission (NAFC) Hall of Fame! 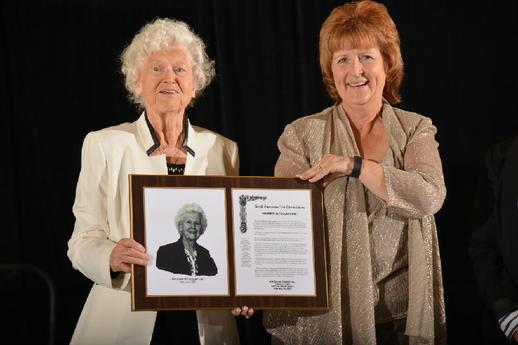 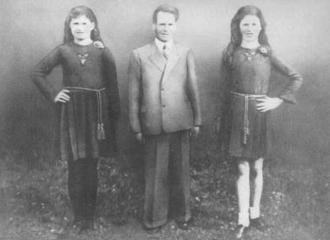 Our beloved teacher and founder, Maureen Hall, passed away in February 2017. She was a giant in the world of Irish dance and left behind a legacy of thousands of dancers and dozens of teachers. Without Mrs. Hall’s efforts and years of dedication, the high-quality dance instruction and beautiful County Cork tradition that New Mexico has come to know and love through McTeggart New Mexico would never have been possible. All of our teachers and dancers owe their years of dancing to her instruction and love. We are honored to continue her legacy and grateful to her daughters, Pat and Anne Hall, for their mentorship and dedication to McTeggart New Mexico. To learn more about Mrs. Hall’s amazing life and legacy, please see the obituary below. 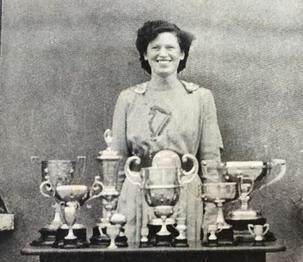 ​The McTeggart School of Irish Dance was established in Cork, Ireland in 1939 by the four McTeggart sisters - Peggy, Nancy, Maureen, and Betty - all of them champion dancers under the instruction of renowned Irish Dance Master,Cormac O'Keefe.

After teaching throughout the whole of County Cork, the second youngest of the four, Maureen Hall, immigrated to the United States with her family.  Keeping with the traditional teachings of the eminent Cormac O'Keefe, she and her two daughters - both former Champion dancers themselves, bring World Class Irish dance instruction to students in 7 States:

Mrs. Hall's youngest daughter, Anne Hall, first began teaching lessons in New Mexico when she came to town for an internship with the Albuquerque Journal. She quickly found many eager students, and in 1997 opened the very first accredited Irish dance school in New Mexico.

Anne's sister, Pat Hall, joined her as our director. In addition to being a certified teacher (TCRG) and adjudicator (ADCRG) with An Coimisiun le Rinci Gaelacha (CLRG) - as are her mother and sister, Pat is the current director of the Western U.S. Region.

To this day, McTeggart students benefit from the experience of the entire McTeggart-Hall family- and through them, the historic teachings of Cormac O'Keefe.

Their instruction has guided many dedicated, disciplined, and passionate dancers to World Championship level competition!